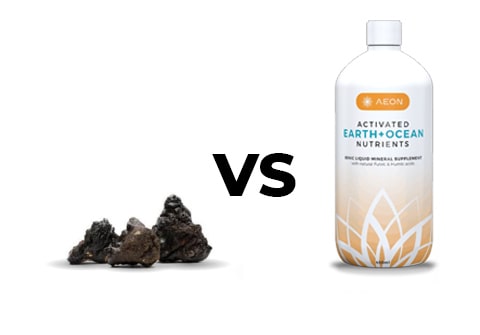 There are many similarities between these two substances, but there are also differences worth exploring. We’ll examine three major areas where they differ: 1) their origin 2) their composition and 3) their effects on human health.

Where Does Shilajit and Fulvic Acid Come From

Shilajit and fulvic acid are natural substances that come from the earth. Shilajit was used in ancient India for its medicinal properties to treat gastrointestinal disorders, kidney stones, joint pain, arthritis and more.

The most common location for shilajit is the Indian subcontinent, with specific areas of distribution in North Eastern India, Nepal, Tibet and Bangladesh.

The source deposit for AEON’s fulvic acid is located in a pristine area of Canada, where the landscape features are internationally recognized as some of the most nutrient dense and purest areas on Earth.

What Is Shilajit and Fulvic Acid Made From?

Shilajit is a resin found in the Himalayas. It can be collected from rocks and soil, but the majority comes from areas where mining has been going on for centuries. This resin is not only prized for its natural beauty, but also considered to have many health benefits including antioxidant properties.

Fulvic acid is the primary active ingredient in Shilajit. This organic acid can be found in plant and animal cells and is also found naturally where water has had contact with a mineral-rich rock such as limestone or granite. Fulvic acids are produced when enzymes break down proteins into amino acids and fulvic acid molecules are released with other substances dissolved within them.

Fulvic acid is composed of sugars, amino acids, enzymes, trace minerals and vitamins. It provides the building blocks for life with essential nutrients including calcium, phosphorous, magnesium and potassium

What Are The Benefits Of Shilajit vs Fulvic Acid?

The various health benefits of shilajit and Fulvic Acid works in similar ways – enabling your body’s digestive system, but it can be used for much more.

Some common beneficial effects of fulvic acid and shilajit:

The Aeon process starts with a patented two-stage purification and extraction that renders only the most highly active molecules. No chemicals are used in this process, so you can rest easy knowing your supplements are completely natural. These ionically charged nutrients have been shown to be low molecular weight and nano-particular sized for increased bioavailability when ingested by humans – which is why they’re more effective than unrefined versions like shilajit.

These proprietary processes render AEON the most pure, toxin-free and effective humic and fulvic acids available.

AEON is made from 100% purified and filtered humic and fulvic acids with no side effects that support your body’s internal systems whereas shilajit has been shown to contain mycotoxins. Unlike AEON, shilajit has a strong unpleasant taste and is difficult to mix in water whereas AEON fulvic acid supplement has a mild minty flavour.

As mentioned above, fulvic acid is the active ingredient in shilajit. AEON contains 100% fulvic acid nutrients. Many of the top selling brands of shilajit only contain between 0.96%-6% humic and fulivc acids per dose. A fraction of what is contained in a single serving of AEON.

Shilajit does have some challenges. It has been previously banned in Canada due to it’s heavy metal content and other potential toxins such as mycotoxins. It has also been known to have a smell and taste that is that is undesirable.

The fact that AEON fulvic acid is 100% purified makes it a better choice. While shilajit and fulvic acid are both organic humic substances with similar effects for improving your gut health or reduce inflammation from arthritis pain, when it comes to health supplements you want the purest product possible. AEON is much cleaner than shilajit because all of its impurities have been removed during the extraction process and contains 100% of the active ingredient.

(US and Canada only for free shipping)

Give the Gift of Health to yourself, family and friends with our biggest sale ever - 50% off MSRP on our 12-pack.

Did you know 80% of your immune system is in your gut? 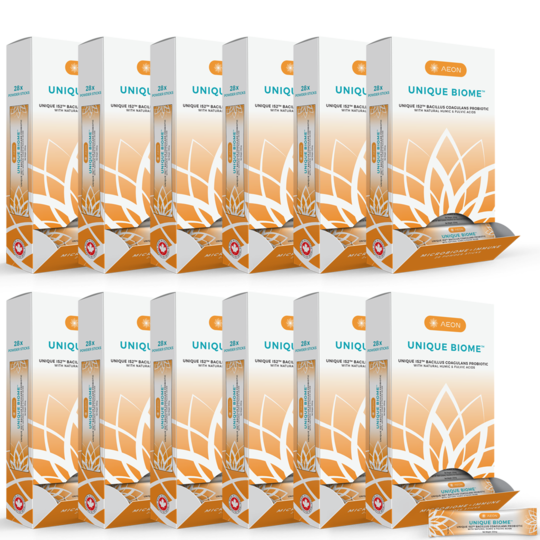